Portugal’s burgeoning ‘Sharing Economy’ to redefine lifestyle of future generations, according to experts 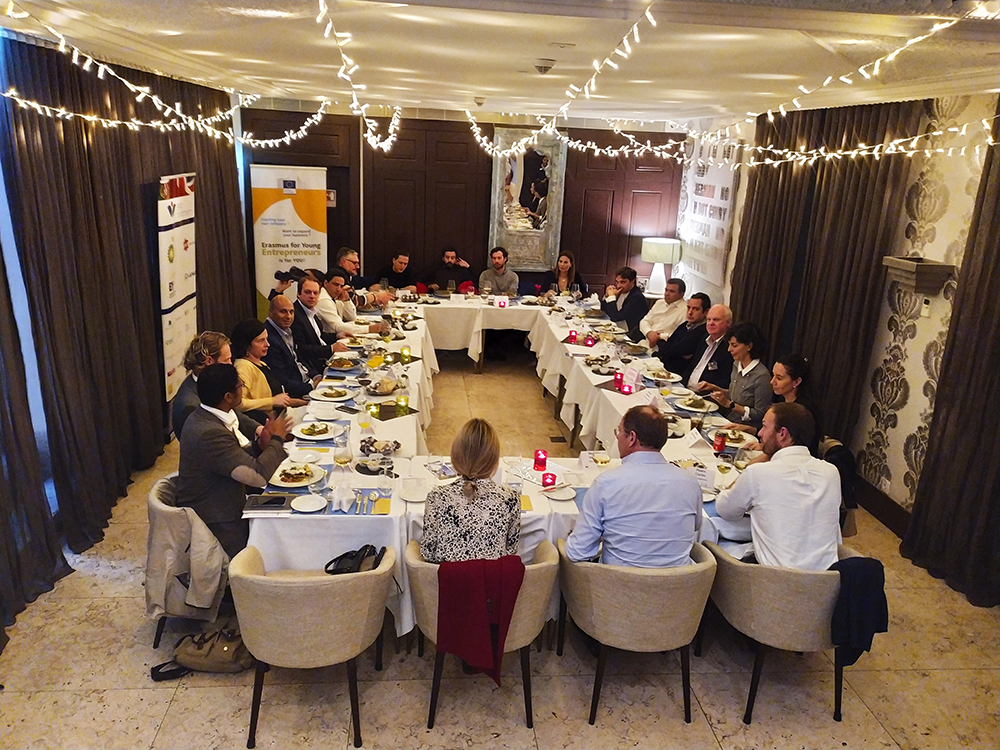 Portugal’s burgeoning ‘sharing economy’ has unlimited potential to enhance and redefine the lifestyle of future generations – but demands new solutions to promote long-term financial security, according to experts.

A brainstorming ‘think-tank’ hosted by the British-Portuguese Chamber of Commerce (BPCC) brought together international business leaders from the co-living, co-working, construction, property and international investment sectors. It involved delegates from Russia, Australia, Germany, Tunisia, Brazil and Angola alongside British and Portuguese counterparts.

The debate considered the pros and cons of the ‘Sharing Economy’ and short-term usage verses long-term ownership.

The ‘Sharing Economy’ is a term used to describe new methods of distributing goods and services, which differs from traditional models involving corporations hiring employees and selling products to consumers. In the sharing economy, individuals rent or ‘share’ things like cars, homes and personal time to other individuals in a peer-to-peer fashion. Further ‘commercial business models’ see companies providing a mobile app that suppliers and customers use to buy and sell goods or services.

While many positive developments were discussed, experts also cautioned for greater governance and control as the nation adapts to new and emerging trends. Delegates in particular warned that a proliferation of ‘sharing schemes’ could lead to generations of possession-less people lacking long-term financial stability.

Pedro Clarke, Partner at A+Architecture, said a major risk with new movements including co-living and car-share schemes is the creation of life-long ‘service users’ without assets. “The risk is that people are becoming decapitalized because they are renting everything,” he said. “This could lead to issues later in life if they need to retire or raise cash. Traditionally, people have sold or traded their assets, but this will no longer be possible if people are no longer accumulating wealth. There is no doubting the immense benefits of the sharing economy, with 1pc of the global population consuming more than the remaining 99pc. I am supportive of the concept but clearly a balance must be struck. We must carefully consider the long-term effects and implications of future generations potentially having no financial stake in society.”

Event sponsor Luis Silva, founding partner at Pedra Silva Arquitectos Lda, said the new movement is being fuelled by advances in technology along with economic and social change. “In recent years digital and creative start-ups have flourished in Portugal and disrupted the marketplace. They have capitalised on rapid changes in consumer behaviour and created new platforms geared towards greater choice and flexibility through shared assets. Within our industry we have witnessed major change in the way people are using space within the built environment. Co-living and co-working are two prime examples which continue to grow in popularity as people combine resources for greater experiences. Sharing maximises the use of an asset which is better for our planet, but also allows access to assets that otherwise would less accessible if the sharing concepts did not exist. This means the younger generation can kick start their businesses early by having access to shared workspace which can fast track business growth. The sharing economy is a fundamental part of Lisbon’s broader ‘smart city’ strategy to become more sustainable, competitive, participatory, creative, innovative and’ citizen centric’. Lisbon has drafted an urban development strategy for the coming decades committing more than €300million in related projects. Key objectives include attracting more inhabitants by improving the quality of housing, smart living services and smart ageing opportunities. The strategy also aims to drive growth, wealth and job creation by attracting more entrepreneurs and broadening access to higher education. While we already witnessing the positive impact of the sharing economy within this wider plan, it continues to hold huge potential to improve quality of life through increased energy efficiency, mobility, social cohesion, local regeneration and citizen participation.”

Liam O’Donnell from DNN said new generations are crying out for flexible solutions but they will need to be driven and implemented largely by the private sector. “People no longer live or work in one place or one city,” he said. “There is a growing demographic of people who don’t buy their first property until their mid-30s, with others choosing to live with parents until later in life. Given this backdrop people are looking for flexible solutions to live in their own space, without having to worry about long rental contracts. The sharing economy has great potential to provide solutions to these people. However, we need the right sort of investors who can supply capital to support new concepts. We cannot simply rely on government and public sector funding. We need serious players who believe in the concepts and can roll out ideas which have been successful elsewhere around the globe. One of Lisbon’s greatest assets is its growing international expat population bringing high-level skills and services. It’s a special place with all the raw materials to attract the top talent to drive new and emerging trends. The ‘sharing economy’ will play a major role in the future helping elevate and improve the lifestyle of younger generations. It will also play a fundamental role in the business community helping entrepreneurs take necessary risks without incurring huge cost.”

The debate led to a closer examination of the precise definition of the ‘Sharing Economy’. There are two main types of sharing economy enterprises. Firstly, ‘commercial business models’ in which a company provides (for a fee) a mobile app that suppliers and customers use to buy and sell goods or services. Secondly, ‘Not-for-profit initiatives’ usually based on the concept of book-lending libraries, in which goods and services are provided for free or for a modest subscription.

Humane City Live Founder Alexander Pichugin said there is a controversial aspect to the sharing economy. “There are certain platforms under the sharing economy umbrella which could be considered exploitation of the poorest segments of society, who essentially cannot afford to buy assets,” he said. “There remain questions surrounding ethics and sustainability as those that do not own assets tend to pay more for the same products over the course of a lifetime.”

Meanwhile, Besma Kraiem of IBK Partners said we are witnessing a paradigm shift within ownership. “Much of the sharing economy appears to involve people acquiring assets or part of the value chain and using them to provide services to other people who can’t afford them,” she said. “This is not the definition of sharing in its truest sense. My understanding of sharing is where people exchange goods or services for little or no cost. What we are discussing here is a completely new form of economy, and one which will require the development of new methods and solutions to protect people potentially without assets in the future. We cannot expect traditional models of wealth generation and security, which have been used to protect people in past, to be applicable in the future. We will need new solutions in response to new forms of economy.”

While cost is recognised as a key driving force powering the ‘Sharing Economy’ delegates also pointed out a series of other ‘lifestyle’ motivations steering new generations to flexible, short-term solutions.

Williams Johnson Mota of B-Hive Living said: “The sharing economy is not only about reducing the burden of cost. We have found that people are making this choice for other reasons including social interaction, to be part of vibrant, international communities. Co-working and co-living spaces for instance attract people from all over the world. The transient nature of the modern working world means people may travel and work for many years before settling down. There is now a population of people who know where they wish to settle down later in life, however they want to work elsewhere perhaps for many years before doing so. They are doing this for life and work experience. These people need flexible living solutions until that time while retaining a sense of community and belonging. While sharing economy has transformed lifestyle options for many people, offering greater choice and flexibility there are still concerns surrounding governance and control. The industry has suffered scandals largely because it is susceptible to issues which do not affect normal business operations. This means there is a constant requirement to review legislation to tighten rules and regulations.”

As Lisbon’s co-living scene continues to boom, delegates agreed that Portugal’s large influx of international expats were making conscious choices to benefit from ‘sharing economy’ services. Many users are making specific ‘lifestyle choices’ based on short-term flexibility, despite having capital to invest in long-term ownership.

The debate was staged shortly after the release of an extensive report from Coliving Insights exploring co-living as an innovative future housing solution. The 72-page study highlighted work involving several delegates. To read more follow the link https://drive.google.com/file/d/1O268kXR_hvT1oUpmvDlQgW02xaVxo30z/view

CoWorkCentral founder Tom Davis said Lisbon’s ‘digital nomad’ scene is showing no sign of slowing down with a thriving start-up scene and expanding tech sector. “Lisbon is adapting rapidly to this changing landscape,” he said. “However, people’s needs and expectations are constantly changing, and the market must respond to that. Digital nomads are continuing to flood in on Schengen Visas for 3 months, briefly leaving and then moving back across. Lisbon is well and truly on the global co-working map and has an excellent reputation for high quality communal workspaces. With added profile from the likes of the annual Web Summit, the market is only likely to expand.”

New enterprise OneSpace – Capsule & Desk was recently set up in Lapa. Investor Helder Hussaine from Capital Holding said the co-work, co-live space was developed due to market demand. “We invest in a broad portfolio of property assets around the world, including Angola, Mozambique and Brazil,” he said. “We were very interested in the Portuguese market but didn’t want to opt for a conventional model. After researching in greater depth and listening to growing demand for co-living and co-working spaces we opened a 62 bedroom ‘Capsule & Desk’ site near the Assembleia da República in Lapa. It’s a vibrant area providing guests with flexibility to live and work on short term contracts.”

BPCC CEO Chris Barton said the debate marked the seventh outing of the BPCC’s ‘think-tank’ series. “The BPCC started these thought-provoking events earlier in 2019 to isolate important topics which affect our members and create space for deep discussion,” he said. “I find it enormously satisfying that we were able to attract such a talented group representing a diverse cross-section of perspectives regarding the ‘Sharing Economy’. As with previous editions we were able to unite large enterprises and key industry players with SMEs and small business owners, in a more intimate environment where they would not ordinarily meet. This creates a fascinating debate where delegates can share their perspectives from across the spectrum. It is also hugely valuable from a networking perspective for our diverse membership base. Due to the positive response we expect to revisit and reassess the ‘sharing economy’ topic again in 2020.”

[email protected]  New companies which join now will avoid a fee increase coming into effect on 1 January, 2020 and will also benefit from a “free December”.