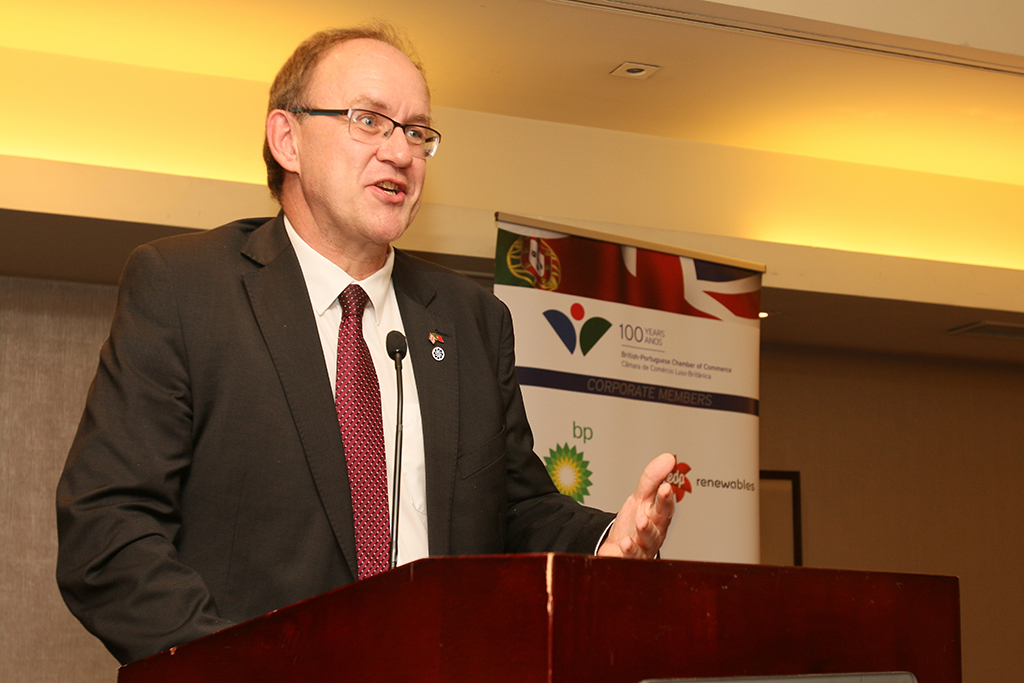 “Anything is possible with Brexit at this stage” according to the new British Ambassador to Portugal, Chris Sainty who addressed a select members of the British-Portuguese Chamber of Commerce this week.

“We are genuinely in an unprecedented uncertain situation, particularly if the vote goes against the Government next week (Tuesday),” he said.

On the scenario or a second referendum and the possibility of staying in the EU, he warned that there are “really formidable obstacles” with the need for legislation in the UK to hold a second referendum. “It’s very hard to see without a government that is willing to take that legislation through Parliament, how that is going to happen” he said.

Then there is the issue of having a majority in the House of Commons which would even vote for a second referendum. “That too is very doubtful.”

The third major obstacle is that there is no time to held a referendum now and the date of the UK’s departure next year. This would mean changing the date of departure which would be difficult politically and that in itself would require another piece of legislation.

“Finally, if we got through all that, and there was another referendum with a vote to remain, we would have to revoke our Article 50 notification and how you would do that is now the subject of a fierce debate in the European Court of Justice” said Sainty.

Another possibility is a Norway or EEA style arrangement with a custom’s union as well to solve the Irish border question which in turn would raise a whole series or difficult legislative obstacles.

On the 25 November the European leaders met in Brussels and signed off on the deal which had been provisionally concluded in the preceding days by the EU and UK negotiators following 18 months of very difficult and intense negotiations taking place in a public spotlight and on some of the most difficult and intractable issues to have come up in any EU political negotiations for many years.

“Whatever the fate of the withdrawal agreement and the political declaration in the coming days, it was quite an achievement, it’s worth underlining just what an extraordinary result the agreement was.”

Now in the final days of the very noisy and intense political debate in the British Parliament leading up to a vote on Tuesday (11 December).

“I don’t think it’s an exaggeration to say that this vote is probably the most important decision that this parliament has been asked to take for many years, it is a decision that will really have very profound implications for the UK for years to come.

THE DEAL Consists of two documents:

The Withdrawal Agreement (585 pages), essentially a draft treaty, which if ratified would be a legally binding document and lays down the terms of the UK’s departure. It covers a number of important areas: the right of citizens of the EU and UK living in each other’s territories, the amount of money the UK will pay for leaving the EU, the extraordinarily difficult issue of how to ensure that we never have to institute a hard customs border in Northern Ireland and the 21 month transition period. The Political Declaration (26 pages) represents a joint aspiration between the UK and EU on how both would like the future trading and security relationship to look like. During the next 21 months that would be converted into a legally binding treaty itself which would come into foce on 20 January 2021.

DEAL APPROVED If the deal is approved, and that can’t be discounted, there can be a high degree of confidence that the UK will leave the EU on the March 29 next year “in an orderly way.”

A 21 month transition period will offer a guarantee for a considerable degree of continuity and certainty — two words which are of particular importance to the business community which views it as an attractive scenario from that perspective. It means the UK will remain inside the Customs’s Union and Single Market until the end of 2020. That means that in terms of the rules and the legal framework and the way in which goods and services move across borders — none of that will change until at least the end of 2020.

During the 21 months, the idea is the UK and EU return to the negotiating table and convert the second part of the deal, the political declaration.

“This is a reassuring message to business and economic actors” says the ambassador with the caveat that many believe the striking of a trade deal by 2021 is “unrealistic” often taking years to negotiate.

If the deal was not concluded by the end of 2020, there are two options: 1) extend the transition period or, 2) move to the backstop.

WHAT IS THE BACKSTOP? The ambassador did NOT elect to discuss this but negotiations between the UK and the EU have often focused on the complicated situation around the Northern Ireland (UK) and Eire (EU) border.

The backstop is essentially a safety net if there is no Brexit trade deal. It would avoid a hard border between Northern Ireland and Eire and would see Britain remain in the custom’s union for as long as necessary until and alternative way of keeping the border open is found.

It would ensure that no tariffs, quotas, rules of origin or customs processes would be applied to EU-UK trade.

At the same time, the UK would be able to strike free trade arrangements with other countries. The Attorney General, Geoffrey Cox has been ordered to publish all the legal advice he has given to the UK Prime Minister, Theresa May. He has handed over a summary. It concluded that the proposed backstop would stop Britain making trade deals around the world in a separate legal document.

This means that if no superseding agreement can be reached within the implementation period, the protocol would be activated and in international law would subsist, even if negotiations broke down. Critics say it is a trap to keep the UK in the EU in all but name.

With any of these options under the deal scenario there is a fair degree of continuity and certainty for business and commerce.

DEAL NOT APPROVED If not approved by the House of Commons, the UK finds itself in a more uncertain and risky situation. There are different scenarios being discussed.

“One of the questions I get asked all the time here in Portugal is — ‘is there going to be a second referendum?’” said Sainty.

“A second referendum is not the policy of the British Government with the Prime Minister saying clearly and publicly that she would not support under any circumstances a second referendum.”

“I worry because no deal is not a choice, no deal is a default of what happens if we get to the 29 March and government and parliament have not succeeded in putting in place some alternative deal or solution,” the Ambassador asserted.

Although there is a small group of Conservatives who want a no deal scenario, the majority in parliament, business and society think that no deal is the worst possible outcome but is not a scenario that can be discarded.

“It would be a bad outcome for the UK, for our European partners and for business all over Europe” concluded the ambassador.