AI is disrupting the Industry in so many sectors. True or False?

The BPCC regularly organises invitation-only brainstorming think-tank lunches where we gather a diverse group to exchange perspectives around a topic which impacts on the evolving workplace.  On 17 September, generously sponsored by Deloitte, we debated the potential benefits and detriments of Artificial Intelligence.  Amongst our guests was Fabio Rodrigues of U5 Marketing who had recently joined the Chamber as a Member, so we invited him to give his feedback on what he was able to take away from the event:

“AI is disrupting the Industry in so many sectors. True or False?”

I started my career in the telecommunications industry in 1999, only twenty years ago; at that time, there was no such thing as data services on regular people’s mobile devices. Small initiatives — e.g. WAP and Bluetooth — were, however, emerging as revolutionary promises. They were presented at technology meetings as huge innovations, albeit dependent on yet-to-come technology, bandwidth and even hardware. 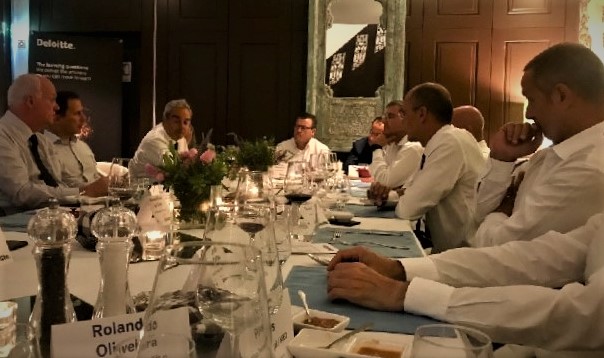 On these occasions, a futuristic imagery of a parallel world, with technological situations and solutions akin to those only existent in films, was brought to life through state-of-the-art videos. One such content was that of a man’s appliances reacting to their owner’s presence by starting to function once he entered his home: a reception contingent on his Location-Based Services Device — or, as it is known today, Bluetooth. Incredibly, in the time span of merely three to five years, an overwhelming amount of this kind of technology was being brought to regular customers at certain events, such as the World Mobile Conference, which focused on the main industry; and even more surprisingly, these same commodities were already becoming obsolete, as was the case of WAP (Wireless Access Protocol, or “data’s grandparent”).

In a welcoming and delightful environment, Mr. Chris Barton from BPCC gathered eighteen experts on the topic (a group in which I was very generously included), to discuss whether or not artificial intelligence has the necessary tools and abilities to partially, or maybe even fully, disrupt the telecom industry. Those present seemed to come to a general agreement that this particular change will not be based on a specific event, nor is it only one launch away from happening; it is an ongoing and ever changing process: a frightening, yet exciting notion for one to contemplate. After all, according to the aforementioned perspective, technological development and advance is constantly happening around us, including at this very moment.

With the thought-provoking question of whether process automation should be considered a type of artificial intelligence, our sponsor for the day, Mr. Pedro Tavares from Deloitte, was the one to start off our discussion. The topic was soon followed by a debate about the role of telecom companies in the environment in which we now find ourselves. A consensus in favour of these companies was reached, as we perceived them to be an indispensable technology integrator.

Over two hours and a delicious lunch, prepared by the award-winning Santiago de Alfama Boutique Hotel, most of the invitees had come to terms with the idea that soon enough we would be living in a world in which people will seamlessly interact with self-driving cars, unmanned drones, nanotechnological anti-tumour pills, as well as other high tech developments which only three years ago could only have been found in the movie theatres.

Text: Fabio Rodrigues and Maria Eduarda Castro
U5 Marketing – Designers as a Service