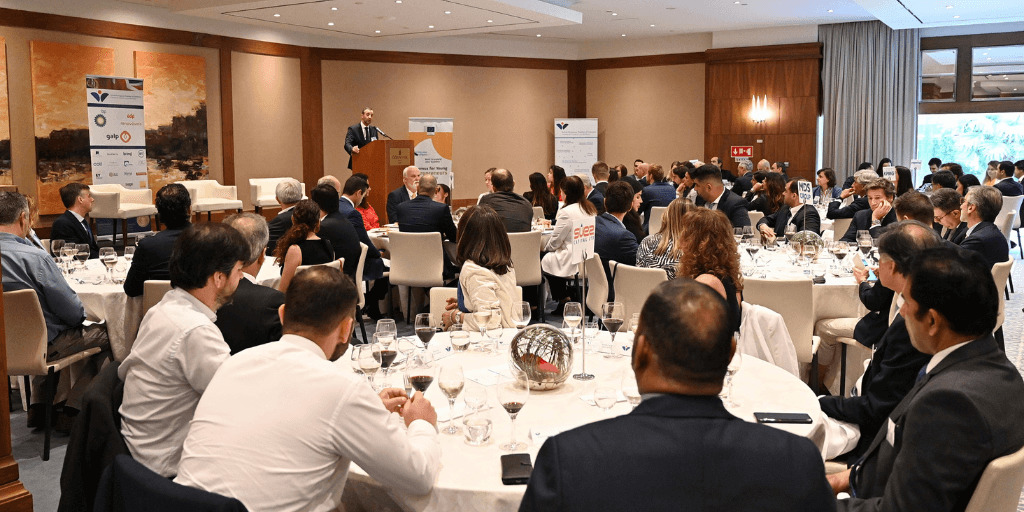 THE AMBASSADOR TO UKRAINE, INNA OHNIVETS SPEAKS OF THE TERRIBLE COSTS TO HER COUNTRY OF RUSSIA’S INVASION AT THE BRITISH-PORTUGUESE CHAMBER OF COMMERCE FUNDRAISER

“We will never surrender” was the defiant call of Ukraine’s Ambassador to Portugal, Inna Ohnivets at a successful Lisbon solidarity fund-raising lunch which netted over €7,000 for charities to support economic recovery and sustain Ukrainian businesses.

The event was organised by the British-Portuguese Chamber of Commerce (BPCC) and held at Lisbon’s Corinthia Hotel.

The full scale of the war following the invasion of Ukraine by Russia had lasted 123 days at the time of the event on Thursday, 23 June. “The war has left devastating effects with thousands of deaths on both sides (estimates 20,000 on each) and forcing millions of Ukrainians to flee their homes, including an estimated two-thirds of the country’s children”, said Rui Almeida, Chairman of the BPCC board.

“Although we are a business chamber focusing on the trade between Portugal and the United Kingdom, we could not remain oblivious to the effects of this war which is on our doorsteps. We don’t doubt that the current conflict is having numerous knock-on effects at macro and micro economic levels”, he said.

The British Ambassador to the UK, Chris Sainty, said he believed that alliances helped nations to thrive and commerce to flourish. There was a clear connection between peace, stability and security, and trade and prosperity, he added, referring to the long historic bi-lateral trade relations between the two Atlantic nations of Portugal and the UK.

“We live in challenging times, and as we all continue to recover from a global pandemic, we are witnessing a horrific conflict on the European continent. We have all been appalled at Russia’s invasion of Ukraine. It is an outrageous breach of international law and the UN charter and towards the whole civilised world”.

The ambassador referred to the “devastating images of towns and villages” in a horrific assault on the Ukrainian people, and those fighting to defend their sovereign country, while many Ukrainian nationals have to “seek refuge around Europe”, including 65,000 in the UK and 41,000 in Portugal.

The warm welcome Portugal had given to these refugees was “very commendable”, with many quickly integrated into society, schools and workplaces.

“At this point there is no clear path as to how and when this conflict might end. We hope that those who wish to return might soon be able to do so. This has become a multi-faceted crisis, with implications for geopolitics, defence, energy, food security, with immediate and long-term humanitarian consequences in and around Ukraine”.

The ambassador reminded that the international community had united around Ukraine “far more that Putin could have possibly imagined”, and that it was clear that security in Europe had fundamentally changed, and that the “future of European security depends on Ukraine emerging as the winner”.

The Ambassador of Ukraine in Portugal, Inna Ohnivets called the invasion of her country on 24 February 2022 the “darkest hour in our nation’s contemporary history”.

“As a result of Russia’s attacks, tens of thousands of our citizens have lost their lives, and many more were wounded.”

The ambassador said almost 12 million Ukrainians had been internally displaced. To support them, the government of Ukraine launched assistance programmes for accommodation, with new jobs and financial support after relocation.

Today, 20% of Ukraine’s territory is occupied, Ukraine’s access to the Black Sea and Sea of Azov is blocked. Russian troops continue to destroy Ukrainian cities and infrastructure with missile strikes and heavy artillery.

More than 2,600 missiles later, one of Russia’s key goals is to destroy Ukraine’s economy, and as a result a major part of economic activity has stalled in Ukraine with the country’s GDP expected to drop by one-third this year.

The ambassador enumerated that In April and May, the monthly budget for the war was almost US$3Bn, inflation reached 17% in May, and Russia’s invasion had destroyed or damaged up to 30% of Ukraine’s infrastructure at a cost of US$100Bn. The overall cost of damage and lost investments and destroyed and disrupted business constitute almost US$600Bn.

“The global food crisis caused by Russia’s war against Ukraine can still be avoided if Ukraine’s ports are unblocked”, said Inna Ohnivets.

This could be done, she said, if effective security is provided, including supplying Ukraine with appropriate weapons to protect the coastline from threats Fromm the sea.

But Inna Ohnivets stressed “no assurance from Russia will do”. “We need to find the solutions of guarantees with the UN and partners. As Russian occupiers continued to “steal grain” they expect countries to refrain from buying it.

The Ukraine government is making every effort to keep the economy afloat, such as supporting relocation or business and launching lending programmes to SMEs.

“Russia must be economically and politically isolated from the world. We call on business to abandon the Russian market and review the risk associated with reputation, regulation, and ethics of doing business in Russia”.

“We also expect international companies which had been working in Ukraine until the invasion to resume their activities in the liberated areas,” she said.

The ambassador said that those companies that had left Russia were “invited to open regional offices in Kiev”.

The Ambassador to Ukraine, Inna Ohnivets, stressed that another critical element of post-war recovery would be trade, liberalisation, and increasing Ukraine’s exports and appreciated the decisions taken by Canada, the UK, EU, and US in this respect.

On a final note of defiance against Russian naked aggression, Inna Ohnivets said that despite the terrible trials Ukraine will not surrender. “The words spoken 82 years ago by Winston Churchill are today more relevant than ever. “We shall never surrender!”

Andy Brown, CEO of Galp Energia, a company which is taking a leading role in supporting Ukraine and its people, explained what the Portuguese oil and gas company had done in support of Ukraine since the war began, and spoke of the “bravery and resilience” of the Ukrainian people.

“In four months Galp has been standing side-by-side with Ukraine, and against Russia. One of the first things we did was to suspend any off-take of product from Russia. We did that within a week of the invasion”, he said

“We used to buy a product called Vacuum Gas Oil (VGO)* which we needed for our refinery and was needed because half the world’s gas oil comes from Russia,” he added.

Andy Brown said that Galp was willing to take the risk of being “short on supply” because the company did not want to “fund this aggression in any way”.

“I think this was an interesting moment in corporate history because Galp was the first of the international oil companies to take that decision, but many with much bigger positions in Russia than us, followed suit.

“It is a unique moment in corporate history when companies take a moral position, not because governments tell them, but because it is the right thing to do,” said Andy Brown.

To support Ukraine, Galp committed €6.5 million. “It’s about how we balance humanitarian support, the support for the refugees that arrive in Portugal, and the building of a sustainable future”.

Galp has also helped logistically with CTT (the Portuguese postal service) and UAPT (Ukrainian Refugees) providing trucks to take aid to Ukraine, while Galp colleagues travelled to Poland and brought 16 refugees to Portugal.

It provided €2.5 million to the Red Cross, €1.75 million to help refugee centres in Portugal, and €1.75 million in Spain. It provided fuel for flights that brought 2,000 refugees to Portugal. We worked in the reception centres in Lisbon, Cascais, Mafra, Matosinhos providing fuel, meals, and welcome packs, as well as building children’s playgrounds.

“What was most compelling for me was not just companies taking a stand and offering money, it was individuals wanting to participate, help, and volunteer, and I think that is a very strong attribute of the Portuguese people”, concluded Andy Brown, CEO of Galp Energia.

The headline sponsor of the event was Galp with the Premium sponsor being Rentokil Initial Portugal.  Other table sponsors included Unipartner, Taylor’s, KPMG, MONERIS, MD Seguros and Suez Capital with further donations from Dr. Shane Farelly of SomarMed, Tim Soloman  and Dr. Ana Delgado from Law-Yours; who collectively donated €6,723.34. In addition, a limited numbered copy of a work by the artist Vhils raised €670. The proceeds from the event raised at the lunch have been donated to the charity “Rebuild Ukraine”.

*VGO is one of the two outputs of the vacuum distillation tower (along with vacuum resid). VGO is the lighter material of the two.

The primary use of VGO is as feed to cracking units such as the FCC or the hydrocracker. These units upgrade VGO into more valuable products, namely gasoline and diesel.

If not upgraded, VGO is blended into residual fuel oil. However, this is rare since the value of VGO is much greater as a feed into upgrading. Often, if a refinery lacks enough cracking to upgrade the VGO it generates, it will sell this as an intermediate to another refinery, rather than downgrading it by blending into residual fuel oil.

VGO is often sub-divided into a lighter and heavier fraction called LVGO and HVGO, respectively.