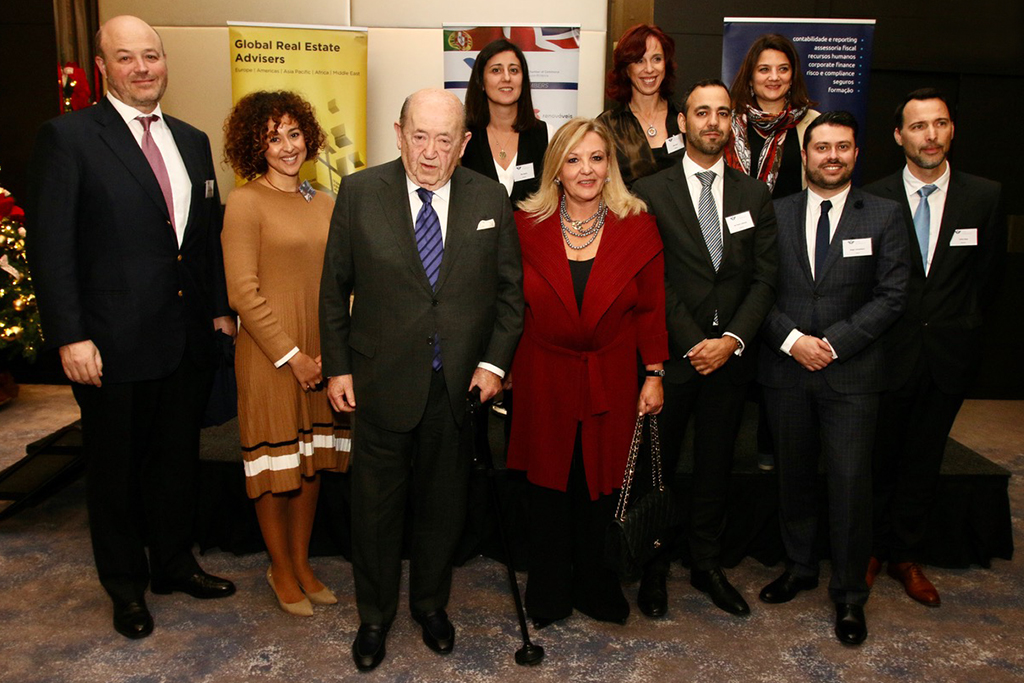 The founder of the modern luxury golf tourism concept André Jordan shared his reminiscences of the past and views on the future at lunch promoted by the British-Portuguese Chamber of Commerce (BPCC) and the French Chamber of Commerce & Industry (CCILF) in Lisbon on 11 December.

An essential and brilliant mind in the tourism and real estate development sectors in Portugal for five decades, the Braziian-Portuguese entrepreneur of Polish-Jewish origins highlighted the wealth and employment created in the Algarve, an area of Portugal which was blighted by poverty and a lack of infrastructure.
In a ‘fireside chat’ approach moderated by Patrícia Liz, Managing Partner of Savills Portugal, André Jordan admitted that the real estate industry was “totally affected and influenced by outside events”
“We are worried by the central banks which are, because of a certain outdated habit, against the property industry whereas before they weren’t because they didn’t want their money standing still and not working for them” he said.
He also said that the world was facing challenges for which there was “no solution” and which are presented not just as a responsibility but as a blame. “All those things, which when I was young, made us proud – the progress, cars, planes, plastic (which his mother thought was a marvel) have now become “all bad” when in fact we aren’t to blame at all because it is all part of development and the great prosperity the world had seen was rooted in these developments.
“We have to see that the great poverty in the world which is much less than compared to what it used to be, particularly in Brazil when a few families dominated the wealth and 90% of her exports came from coffee, came from this progress” he said.
Turning to global warming, André Jordan pointed out that despite the criticisms of teenage environmental campaigner Greta Thunberg, before she came on the scene the world was “blind to the problems” that the world is facing. “Here was this child who saw that these problems would affect her and her generation while adults were happy to worry about it later” he said.
“People are very selfish. There is a lack of system and organisation with clear objectives on how to deal with the consequences of climate change. What is needed is a consensus on a world level to deal with it” he added; a programme similar to that used in companies to deal with this “really serious global threat.”

Technological Progress
“We were able to overcome so many problems, from plagues and diseases like polio and we have to work together to solve these environmental problems” he said.
Artificial Intelligence, he explained, would put millions of people out of work, and that with the pace of change, for each 1000 made unemployed only 100 jobs would be created. On this, he felt there needed to be a global agreement that AI would stop at a certain point.
It also made him angry when Donald Trump was flippant about nuclear weapons and Iran. “Whoever used them will suffer the consequences in return. Everyone knows this and won’t use the bomb”.
“We have arrived at the time when all of us have to be great statesman and accept the great threats facing humanity as if they were our own.
André Jordan said he didn’t want to “dampen the mood” but warned that humanity was facing the consequences of a revolution in technology and artificial intelligence and it didn’t really know how to deal with the possible consequences of mass-unemployment as many routine jobs would be undertaken by robots and machines.

Causes for good
“I have always thought it worthwhile to get involved in causes in which there is no personal economic interest and profits. You get a lot more pleasure out of it” he said of the various youth causes he has been attached to over the years.
“In this respect I have allied my self to causes linked to art and education, youth and did my part and when I felt I had fulfilled my mission, I moved on,” he explained saying when these associations and entities continued and prospered her felt a certain satisfaction.
He said that despite the problems it had caused, one shouldn’t forget the success of capitalism which had created democracy, progress and had brought the best talents to the business world.

The Algarve
On the development of the Algarve, taking out the success of the Golden Triangle and Quinta do Lago, André Jordan said the region was so much better and more developed when he had arrived in the region 50 years ago when there was scarce a cinema let alone hotels and developments.
“The Algarve was a poor, rural area which was very charming but has nothing there. There were no book shops, shopping centres or galleries, hardly any cinemas let alone a direct motorway and when I bought the land for Quinta do Lago I met a couple there who had never ever even been to Faro!”
He said there were no professionals overall and certainly not in the real estate sector which was restricted to people putting for sale adverts in the newspapers.
There was a certain tradition in terms of hotels, a tradition of great formality, it was treated by the English residents like a small colony, mostly middle class who didn’t have that much money. One English woman said to him “Oh, I hear you’re doing a development near the airport. How convenient for business people!”
“I think the Algarve today is still one of the best preserved tourist areas in the world. I’m not talking about Albufeira or Armação de Pêra but compared to Southern Spain with huge buildings just five metres apart from each other, there has been a lot of concern from the large developers to preserve the locality and build quality developments” he explained.
“It is actually cheaper to do developments which are environmentally sustainable and correct than not in the long run” he said of the various environmental and water management awards the André Jordan Group has won over the years for his flagship developments of Quinta do Lago, Belas Clube do Campo and Vilamoura XXI.