VILA VITA Parc Resort & Spa, located in Porches, in the Algarve, was distinguished yesterday with the award Chave de Platina 2018, the most prestigious award attributed by the Portuguese guide Boa Cama Boa Mesa, owned by the renown Impresa Group. This is the second time the resort receives this award .

Along with this recognition, the 2 Michelin star Ocean Restaurant, located at VILA VITA Parc, has also been distinguished for the sixth time with the Garfo de Ouro award. 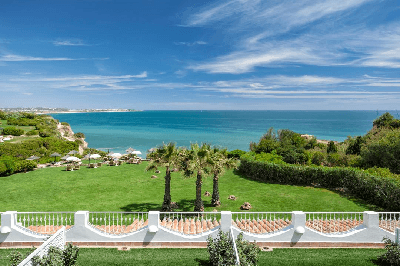 The Boa Cama Boa Mesa Guide Awards, which this year celebrates its 15th anniversary, distinguish annually the best of the best in terms of accommodation and restaurants in Portugal,  through the awards of Chave and Garfo de Platina e Ouro along with the Chave and Garfo de Prata which have been just been added this year. The awards ceremony took place yesterday, the 27th March, at the Cineteatro Capitólio, in Lisbon, and was presided by the Minister of Economy, Manuel Caldeira Cabral, and Francisco Pinto Balsemão, Chairman of the Impresa Group.