Virtual Fire-side Chat about Brexit, US Election And The Rise Of Lisbon’s Startup Ecosystem 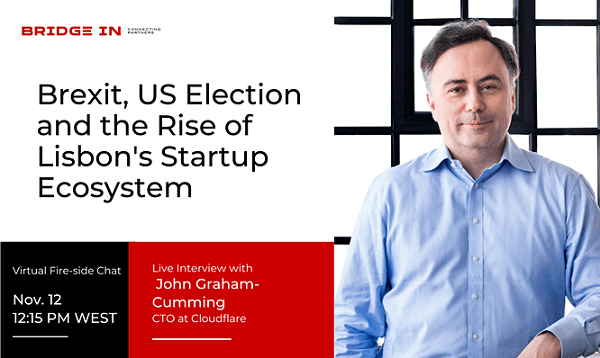 Description:
John Graham-Cumming is CTO of Cloudflare. After heading up Cloudflare’s operations in London, he’s permanently based in Lisbon to lead and grow the company’s operations in Portugal. John is a computer programmer and author. He also is best known for starting a successful petition to the Government of the United Kingdom asking for an apology for its persecution of Alan Turing.

Rosa Jimenez Cano, Chief Ecosystem Relations at The Venture City, will interview him discussing the uncertainty caused by pressing events such as Brexit and the US Election, and the rise of Lisbon as an internationally recognised innovation & startup hub.

The event is organised by BRIDGE IN with the support of the British-Portuguese Chamber of Commerce and Invest Lisboa.